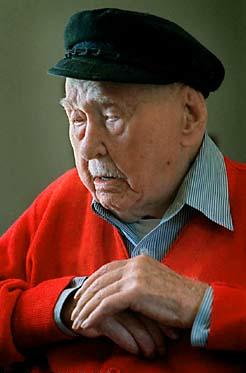 Christian Mortensen, one of the oldest people in the world, died last Saturday at the age of 115.

A spokeswoman for the Aldersly Garden Retirement Center, where Mr. Mortensen had lived since 1978, said he died in his sleep. Briefly married 85 years ago, he has no living relatives.

Mr. Mortensen's age had been confirmed by John Wilmoth, a demographer at the University of California at Berkeley.

Mr. Wilmoth said research showed that Mr. Mortensen was born on Aug. 16, 1882, in Skarrup, Denmark, and came to the United States when he was 21. Mr. Wilmoth had researchers in Denmark locate a birth certificate, immigration records and census documents.

On his 115th birthday Mr. Mortensen said of his longevity, ''Friends, a good cigar, drinking lots of good water, no alcohol, staying positive and lots of singing will keep you alive for a long time.''

the oldest person who ever lived?
The world's oldest ever supercentenarian: Jeanne Calment (1875-1997)